HAPPY AUSTRALIA DAY? I say this with mixed feelings, and really feel that we should change the date, for to the First Nations Aboriginal peoples of Australia, that have lived here continuously for over 70,000 years,Australia Day, is not a day to celebrate! Many call it Invasion Day for obvious reasons, except for a mob in South Australia who call it Survival Day, a day that acknowledges and reinforces the present and future of aboriginal culture, despite the negative effects of colonisation. I like the name Survival Day better!

Please read: Australian dig finds evidence of Aboriginal habitation up to 80,000 years ago 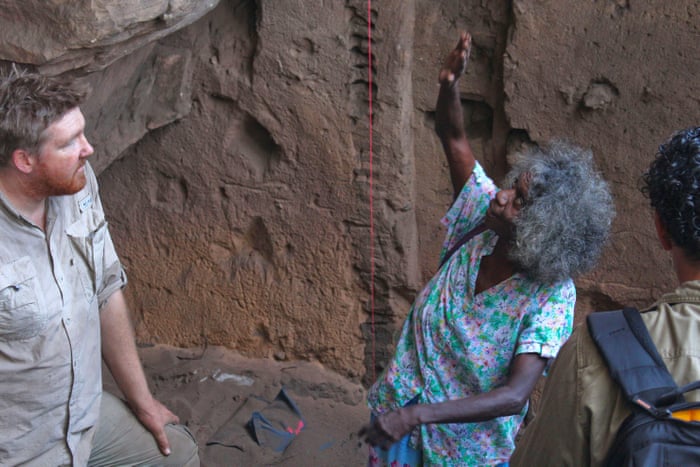 Although aboriginal people were the first custodians of Australia, they were not treated so :(.

Aboriginal people had their land taken from them, many of them were killed, and they were not even considered people until 1967, when aboriginal people were given the right to vote and were granted citizenship!

Why Australia Day?  Australia Day, is the official National Day of Australia. Celebrated annually on 26 January, it marks the anniversary of the 1788 arrival of the First Fleet of British ships at Port Jackson, New South Wales, and the raising of the Flag of Great Britain at Sydney Cove by Governor Arthur Phillip.

To celebrate a Nation on the basis of raising a flag, to denote ownership of the continent by the British,  ownership which was not theirs to take, was simply part of British imperialism,  a slap in the face to the original and current occupants of the land, some who have been here for at least 70,000 or even up to 80,000 years! No wonder it is otherwise known as Invasion Day!

To sell land, and own it as we know it today, was/is not part of Aboriginal culture or values. Aboriginal people respect/ed their country and treat/ed it as a Mother, who gives/gave them their home! They used the land along different territorial/country borders, which often overlapped, and were often Matrilineal. There were over 500 different aboriginal nations, many with distinctive cultures, beliefs and languages.

Aboriginal people have a spiritual relationship to the land, therefore honored their relationship with the land, lived as best they could within nature’s natural cycles, never taking more than they needed, and thereby keeping the balance.

For, the British,  to stake an imperial claim, stating that they were the first one’s on Australia, which was called Terra Nullius, at the time, because people believed that no one lived there; and to deny the existence of people when they arrived, not even calling them people, but just part of the wildlife, is total arrogance, ignorance and plain right nasty!

Long before European explorers made contact with the Aborigines, the Aborigines of northern Australia had contacts with the Indonesian, Malay and Macassan fishermen who came in search of trade, of trepang (bêche-de-mer, a large edible sea cucumber) and tortoise-shell.

Also, the Dutch had been exploring the Northern Coastline of Australia, and made a brief settlement there, at least 170 years earlier.

To celebrate Invasion Day, is  like having Hitler’s Birthday as Holocaust memorial day!

And, now it seems that our right wing government don’t even recognise aboriginal people as Australians, according to a current online citizenship test. The question asks, ‘”From what country did aboriginal people come to Australia by boat from?” This sounds to me as though they are trying to equate aboriginal people, as refugee boat people!

The answer according to our latest Science, is Indonesia/Sumatra, post Mount Toba eruption, 76,000 years ago, and some artefacts made by aborigines found in Kakadu date possibly as old as 80,000 years! First waves of people may have come to Australia, even prior to Mount Toba eruption!

Aboriginal elders in the far north of Northern Territory have stories and have pictographs of Yingana, Creation Mother, carrying lots of dilly bags full of babies, painted by their ancestors. Yingana, is believed to be the first female ancestor who landed upon Australia from the North, thus aboriginal people have been here a long, long, time… 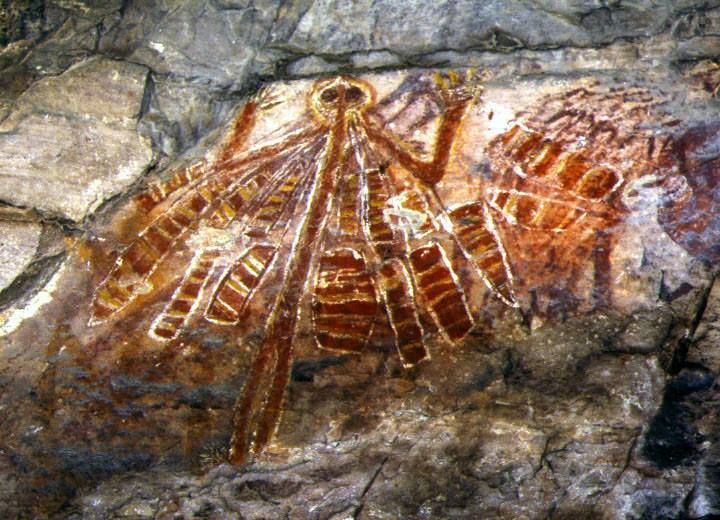 Yingana, Creation Mother, carrying lots of dilly bags full of babies,  painted by the  aboriginal people of Australia. She is believed to be the first female ancestor who landed upon Australia from the North, approximately 70,000 years ago, post Mount Toga eruption, Sumatra/Indonesia.  Pictograph, c. 20,000 BCE. Gunbalanya, NT, Australia.

Aboriginal people made the most of this harsh land, lived as best as they could in harmony with this land,  knew its seasons, its medicines, where all the waterholes were, they knew the secrets of this land. They have a spiritual relationship with this land, and they are still here! 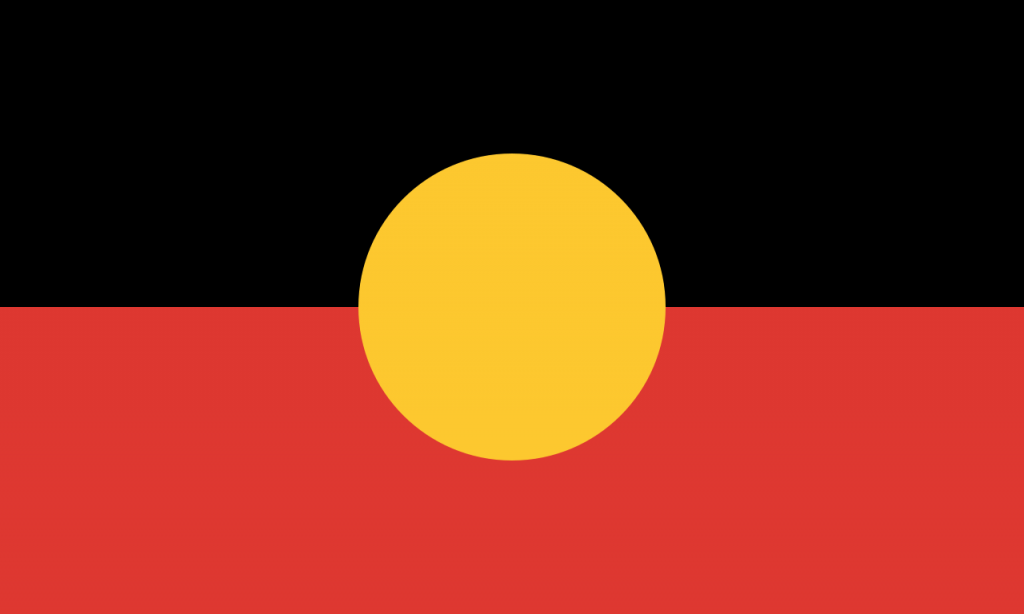 This is the Australian Aboriginal Flag ©. 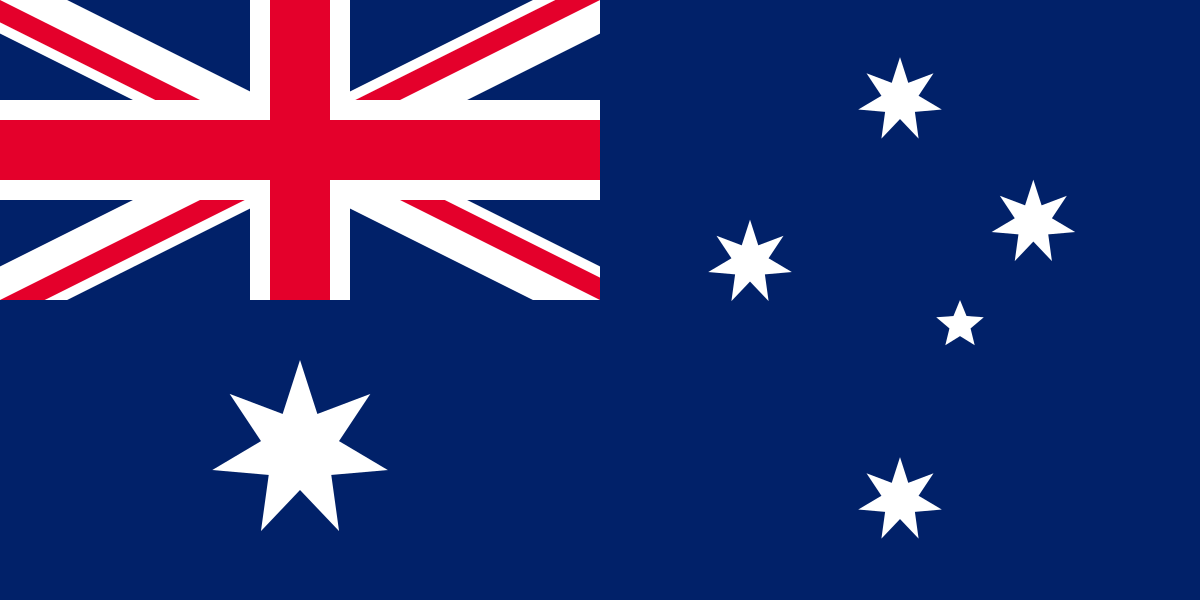 The Australian Flag © : Made up of a Union Jack( Britain) and the Southern Cross and one pointer only,  Alpha Centauri, that can be seen in the Southern hemisphere.

Why do we still have this flag? Why are we still connected with Britain? Why don’t we recognize the original occupants of Australia?

My proposal for the New Australian Flag

First of all we need to get rid of the Union Jack,  as Britain did not treat colonists well either, and Australia has no links with the British parliament anymore.

To have a combination of the Australian aboriginal flag (which would unite us under aboriginal values of respect and spiritual connection to the land and would acknowledge our First Nations people as the original custodians of Australia), with the Southern Cross  (“Eagle’s foot”) and its pointers, both Alpha Centauri and Beta Centauri (“Eagle’s Club”),  as it actually is, would value and respect aboriginal people’s cosmology.

The Southern Cross constellation and its pointers, would also represent all the different people who live here in Australia under Southern Skies!

It would also represent our ‘cosmic origins’ as as we are made up of the elements of stars!

When Captain Cook first asked the Australian aborigines where they were from, they pointed up at the stars!

At heart, we should aim for Collaboration and Unity, for separateness does not create harmony, identity, nor shared goals nor dreams!

And, let’s get this fact straight! The 26 January 1788 was not when Australia was formed. That happened when Australia became a Federation in 1901, and even more true to the original people of this land, it could be on the anniversary of Terra Nullius being overturned by the Mabo decision in 1992!

There are so many possible better days to celebrate, without the grief of remembering the Imperialist British using Australia as a penal colony for their prisoners- many whom were imprisoned for stealing bread, because they were poor and hungry- and as cover for their denial of the sins and the long suffering genocide (and abuse) of the First peoples of Australia, the Australian Aborigines.

And,  if we are to still have a public holiday on 26 January, then we should celebrate it for the Rum Rebellion of 1808, which was the only successful armed takeover of government in Australian history. We need more of this thinking, with our corrupt government. Power to the people!

I don’t think it would be very difficult to make another National public holiday, one in which celebrates and recognises the diversity of our First Nations People, and all people that live here in Australia! 🙂

Together, hopefully, there will be more emphasis on collaboration rather than competition in culture at large in the future, as that really seems the best way to survive in the long run, and the way things are in so many areas we really do need to get our collective act together!

Yet, we must put First Nations people at the heart of our Australian identity! Treaty will bring the ‘bridging of heart’ hat is needed here, in order for Australia to go forward with pride and true National Identity, celebrating the diversity of all who live in Australia.

These facts are for certain, Australia is the oldest continent in the World, with rocks and minerals up to 4.4 billion years old; and has the oldest living culture, the Aboriginal people of Australia, on this planet! This is certainly something to be proud of and needs to be celebrated!

Let’s create a better future together. 🙂 ❤

2 comments on “Happy Australia/Invasion Day? Is it a day to celebrate?”

Welcome! Hello, my name is Bridget Cameron. I am an poet, writer, photographer, musician, artist, counsellor, naturalist... I am inspired by the beauty in nature, in people, music and the unseen. I like to ask the big questions, yet enjoy the simple pleasures in life, and am guided by compassion. Blessings to you, Bridget :)

A Slice of my Life.

me in Mt Abu, Rajasthan, with locals.

Walking into the Light.

It’s the little things that count.

Alone on the Stage of life!

Garden of the Sea.

Me and my daughter.

Thanks to all my visitors